Quick Look at A New Book: Match of Wits by Jen Turano 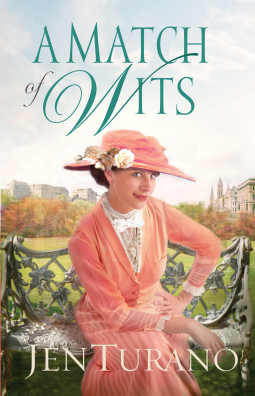 Zayne and Agatha have always been a match in wits, but will unlikely circumstances convince them they could also be a match made in heaven?

Sissy: We are book snobs. When I see a book from a Christian publishing house, I will admit that I am immediately beset by a bias which tells me it will be overly cheesy.

Bubby: Possibly with a side of overly preachy.

Sissy: Yes, that too. And I am a Christian. Bubby is too, on a good day.

Bubby: And what, I’m a Druid Priestess on bad days? Sheesh! It was once that I hosted the skyclad dancing under the moonlight in the backyard. Let it go!

Sissy: If that were true, you’d be much more entertaining. Anyway, what I was trying to say was that when I read a novel from a Christian publishing house that surprises me with its literaryness, I have to eat my words and bash my bias. A Match of Wits resulted in word-eating by moi.

Bubby: It’s witty and funny and fast paced and has a spunky heroine with a take-no-prisoners attitude. Great read.

Sissy: Everything Bubby said plus a good dose of wacky tongue-in-cheek adventure and dialogue. Surprise, surprise! I recommend you read it. 3.5 bubbles

Bubby: I will definitely be on the lookout for more by Jen Turano. 3.75 bubbles.

Click HERE to buy Match of Wits by Jen Turano

One Came Home by Amy Timberlake

Georgie Burkhardt’s sister Agatha is dead. Everybody says so. They have a body and it’s wearing Agatha’s blue-green ball gown. But Georgie doesn’t believe.  So she sets off on a journey into the western frontier with her determination, her Springfield single-shot rifle and a mule named Long Ears. Georgie knows in her heart that Agatha must still be alive and she is bound and determined that she will find her.

Sissy:  This is another book that may at first seem too young for our demographic because the protagonist is only 13.  But it is another book where that supposition would be wrong.  It is good writing that transcends all age groups (well, probably not pre-school age, but you know what I mean).  How often, these days, do you get to (or even want to) read a good Western?  Cuz that’s what this is–True Grit meets The Birds.

Bubby: Yeah, the birds kinda freaked me out a little bit. I am sad (I guess) that there are no more passenger pigeons flocking about the countryside – evidently they moved in these massive migratory patterns consisting of thousands and thousands of birds – but I am glad that I don’t have to live in a place that is full of pigeon doodoo. But the story is good and that’s all that matters.

Sissy: I do know that I never want to be in the middle of a pigeon migration. I never want to be in a pigeon hunter’s camp. And yes, I thought the birds were creepy. Georgie, however, I really liked. That girl has some spunk and tenacity. She was not going to be moved from what she believed and acted on it, even in the midst of some pretty dangerous times. I understand her point of view but I would also duct tape my 13 year old to the wall if they ever tried to do what Georgie did.

Bubby: Can you imagine, Sissy? If one of your older kids disappeared and then was presumed dead? And then your 13-year-old decided it wasn’t true and took off with his trusty rifle in the midst of the lawless wild west to go find his missing sibling? Terrifying! I really feel for Georgie’s mom. Here she is mourning the loss of one child and then the other runs off to who knows where. At least Georgie is not alone on her adventures. She has Billy McCabe, her sister’s former beau along to take care of her – although she ends up taking care of him instead!

Sissy: This story was engaging and fun to read although I wanted more out of the ending. I wanted Georgie to grow up and fall in love with Billy.

Bubby: Me too! Dangit!

Sissy: But that’s not what Georgie wanted. Her life goal was to be an unmarried shopkeeper and she had a great head for business. So I cannot impose my desires onto her life, although it would have made the story better I think.

Bubby: Who knows what the future could hold for Georgie? I personally see a sequel in the future. You know, Georgie’s store gets robbed and she heads off to deal some vigilante justice and ends up marrying the misguided thief who has a heart of gold. It could happen. Hey Amy Timberlake! You listening?

Sissy: Why don’t you drop Amy Timberlake an email right away – -I’m sure she’s just sitting waiting for your story ideas.

Bubby: I’m just saying that it could happen. You don’t know. At any rate, it was a great book. There were twists and turns that I didn’t anticipate and I truly didn’t know until the very end if Agatha was dead or would turn up alive. Definitely worth a read. 4 dusty, pigeon feathered bubbles from me, pardner.

Sissy: Oooh, stinky, Bubs! One Came Home is a quick, fun title to read. I give it 4 squeaky clean bubbles.

Click HERE to buy One Came Home by Amy Timberlake at Amazon.com