Quick Look At a New Book: A June Bride by Marybeth Whalen 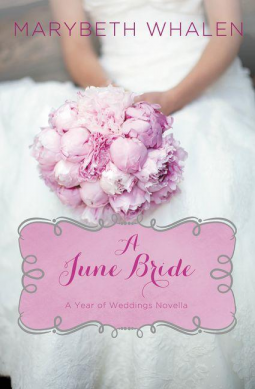 Wynne Hardy never thought she’d get engaged on a reality TV show, but when she met Andy on The Rejection Connection, the two of them hit it off. Now he’s asked her to marry him, much to the public’s delight and fascination. They’re all set to wed on live TV in a seaside ceremony at the height of the wedding season.
But just as Wynne thinks all her dreams are coming true, her ex-boyfriend walks back into her life at the worst possible time. Steve broke her heart years ago, and she’s still sorting through her feelings for him. Her heart isn’t as clear as her head that it’s past time to move on-even though she’s engaged to Andy.
At a local TV talk show appearance, Wynne meets Meredith, who won another reality TV show-Marathon Mom-proving herself nothing short of a superhero. As Wynne’s beach wedding plans spin out of control, Meredith offers to help, unknowingly stepping on Wynne’s secret feelings . . . and exposing some secrets Meredith has been keeping to herself. Can these two reality stars get real about their feelings? Will Wynne go through with her televised wedding and be the perfect June bride the network is looking for?

Bubby: I often wonder when I see this type of  TV show, how much of the emotion is real and how much is scripted? The relationships hardly ever seem to last past the season finale. I wonder how many of the contestants are really there for love and how many are there to get their face on national TV? After reading A June Bride, I have a feeling it’s worse than I thought! Let’s just say that poor Wynne seems to be the only one in the whole place who’s actually interested in lifetime love.

Sissy: I couldn’t decide if Wynne is a hopelessly optimistic naive young thing or just an idiot. She doesn’t seem the type to accidentally find herself in the media storm of a reality TV show. Also, I was disturbed by ex-boyfriend Steve and how he had rejected her previously. I didn’t want to trust him too easily. Having said that, I actually enjoyed reading A June Bride. It was entertaining in a fluffy sort of way and got me happily through a 5 mile walk.

Bubby: Fluffy? Yes. Sweet? Absolutely. Like a large marshmallow rolled in caramel and dipped in chocolate. A perfect sweet treat for an afternoon escape. 3.5 bubbles.

Click HERE to buy A June Bride at Amazon.com