Stargazing From Nowhere by Isabel Thomas and Marilyn Thomas 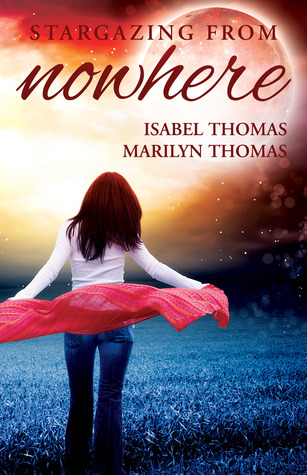 What if you were loved by your rock star crush? Kristen’s blog is about to get her into trouble – deep trouble – when she says negative things about a rock star. When she finally meets him, and falls for him, should she confess? As they grow closer, does she have to make a choice between blog or boyfriend…or is the choice made for her? (From Amazon.com)

Sissy: I was not immediately entranced by this book because it starts off with a blog entry and twitter feeds from a 15-year-old. I felt too old/dignified to relate. But since Bubby had said she liked it, I carried on and got caught up in the story. Teenage blogger Kristen was almost painful for me to read about because she is one of those girls who is likely to fall into every uncomfortable, embarassing, angsty situation and you can see it coming a mile off. You know, like in those movies where you cover your eyes and say, “No! NO! Don’t do it!”, because you know a hot mess is imminent.

Bubby: I, being significantly younger and hipper than Sissy, instantly related with Stargazing From Nowhere. But I too cringed at the antics of poor Kristen. She’s like the classic bumbling character who just can’t get it right. At least not for the first half of the story. But then she learns to look before she leaps and to listen to her best friend Maggie and life starts getting better.

Sissy: Yep. Young and hip. You are, Bubby. Whenever I look at you in your perm and slippers, I read “young and hip” all over. Now hand me over my prune juice!

Bubby: I do not have a perm. Not since the early 90’s. And I don’t wear slippers – they make my feet claustrophobic. But I am probably neither young or hip to anyone 30 or under! That’s ok. I feel young and that’s what counts! But back to Kristen. You know that one movie star/lead singer/guitar god you had the WORST crush on when you were 15? (That would be Jon Bon Jovi for me, by the way). For Kristen, it’s Michael Stevens, drummer of the hit band Rising Tide. And then she actually meets him, when he and the band come to town. And then drama and hilarity ensue. Fun! Who was your superstar crush, Sissy?

Sissy: Harry from One Direction!

Bubby: Oh, the one who’s younger than your children?

Sissy: I’m not telling you who my actual crush was because I am ageless. I refuse to date myself with references to aging –

Sissy:  – rock stars. I am timeless. I AM the crushed-upon superstar, full of charm and mystique and cachet. Do not sully my reputation by asking me about people like Rick Springfield, to use an example far before my time. But back to our story. When you say Kristen was bumbling, it doesn’t mean she is dumb or unattractive. She just has a knack for making the worst of awkward moments and her mom is not much help. In one scene, I was so angry with her mom for being so completely meddlesome and rude in the name of doing what’s best for her daughter. I would NEVER be that way.

Bubby: Shall we ask your children about that?

Sissy: No thanks! Anywho, one of the things I liked about Stargazing From Nowhere is that it is not resolved too quickly and too neatly. It plays out realistically in all its teenage angstlyness and though it ends up happily I was reminded of how glad I am to be far away from those years.

Bubby: Oh yes. Although I had a great time in high school, I am not interested in doing it over again. I love that Stargazing is about a teen with a blog, even if I am jealous that hers gets more readers than ours! I really love that Stargazing was written by two sisters –

Sissy: -because two sisters, a blog, get it?

Bubby: Exactly! I still think we should write a book someday, Sissy. And if we do, I hope it’s as much fun to read as this book was.

Sissy: So Bubby was right after all. Stargazing From Nowhere was an enjoyable book, even though I wanted to take a Xanax to calm my nerves after all the hormone-laden disquietude. 3 1/2 bubbles.

Bubby: A fun and quick-moving read for adults and my 15 year old will love it too! 3 1/2 bubbles from me too.

Click HERE to buy Stargazing From Nowhere at Amazon.com