Quick look at a sequel: The Nightingale Sisters by Donna Douglas 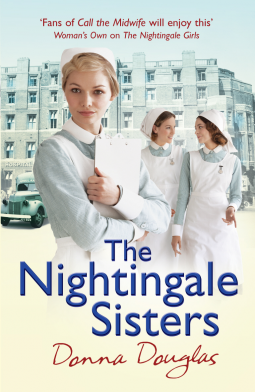 To the student nurses at The Nightingale hospital, the ward sisters are heartless and frightening, with impossibly high standards. But the sisters have troubles of their own…
Violet
The new night sister is not all that she seems. Who is she and what dark secret is she hiding? As the mystery deepens, Sister Wren is determined to find out the truth.
Dora
The student nurse is struggling with her own secret, and with her heartbreak over Nick, the man who got away. A new arrival on the ward brings the chance to put a smile back on her face. But can she really get over Nick so easily?
Millie
Dora’s fellow student is also torn between the two men in her life. But then an unexpected friendship with an elderly patient makes her question where her heart – and her future – really lies.
As the nation mourns the death of King George V, it seems as if nothing is ever going to be the same again, especially for the women at the Nightingale.

Sissy:  Back at the beginning of June we reviewed the first book in this series, The Nightingale Girls.  Much to our delight, we were able to receive a copy of this book, number two in the series, so we just had to read it!  And recommend it to you!

Sissy (again):  Oh, you thought Bubby might chime in about how much she enjoyed the continuing saga of Dora, Helen, and Millie?  You thought she would natter on about the new nurse Violet, or wail about waspish sister Wren?  Well, you thought wrong.  Bubby is, at present, in Spain!  You heard right–Spain!  But I am not jealous.  Oh, no–I would never begrudge Bubby the opportunity to savor the sights of Seville and meander in Madrid.  And I certainly carry no envy concerning her plans to leap over to Lisbon, Portugal, and trot down to Tangier, Morocco.  I am perfectly happy to  stay here and write this blog by myself in the exciting and stimulating environs of small town America.  So, until further notice…

At any rate, The Nightingale Sisters is thoroughly enjoyable, and you will find yourself highly invested in the dramas, highs and lows, and everyday dealings of the nurses at the Nightingale hospital.  4 starched-white bubbles!

Also–Stay tuned for upcoming blogs from me and various guest bloggers in my sister’s absence.  It will be exciting!

Click HERE to buy The Nightingale Sisters by Donna Douglas at Amazon.com 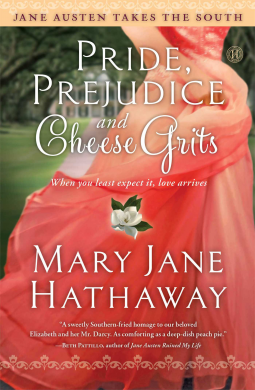 This hilarious Southern retelling of Jane Austen’s Pride and Prejudice tells the story of two hard-headed Civil war historians who find that first impressions can be deceiving.

Shelby Roswell, a Civil War historian and professor, is on the fast track to tenure—that is, until her new book is roasted by the famous historian Ransom Fielding in a national review. With her career stalled by a man she’s never met, Shelby struggles to maintain her composure when she discovers that Fielding has taken a visiting professorship at her small Southern college.

Ransom Fielding is still struggling with his role in his wife’s accidental death six years ago and is hoping that a year at Shelby’s small college near his hometown of Oxford, Mississippi, will be a respite from the pressures of Ivy League academia. He never bargained for falling in love with the one woman whose career—and pride—he injured, and who would do anything to make him leave.

When these two hot-headed southerners find themselves fighting over the centuries-old history of local battles and antebellum mansions, their small college is about to become a battlefield of Civil War proportions.

With familiar and relatable characters and wit to spare, Pride, Prejudice and Cheese Grits shows you that love can conquer all…especially when pride, prejudice, love, and cheese grits are involved! (From Amazon.com)

Sissy: Well, bless my soul! I’m tickled Magnolia pink to have found Mary Jane Hathaway and her “Jane Austen Takes The South” novels. The South is a perfect venue for Austen-inspired tales with all its tradition and social mores. This story was absolutely dee-light-full. Shelby and Ransom were the perfect dueling duo and the dialogue is hilarious. I found many well-done Pride and Prejudice allusions and no, I never got sick of them! Shelby’s mother and sisters are so shallow and snarky, it would be as satisfying as a slice of pecan pie to pop them all in the mouth.

Bubby: I know that one is not supposed to judge a book by its cover, but some of these covers lately have been so gosh darned lovely that I just can’t help it. Just look at that cover. Look at it, I say! That’s a frothy confection if ever I’ve seen one! And the color! And the little magnolia blossom in the middle between the title and the author? Scrumptious. Good for me that the book inside is just as yummy. Shelby and Ransom have that instant attraction-at-first-sight thing going on. There are little frissions of romantic tension every time they are within 20 feet of each other and Mary Jane Hathaway is so skilled at writing that you can feel it from your armchair. And then Shelby keeps putting her foot in her mouth and Ransom keeps misunderstanding things and it just gets more deliciously tangled the further you read.

Sissy: There are two intriguing subplots going on as well. One involves Shelby’s graduate student Katie and the greasy slimester real estate man (David Bishop) that Shelby’s vapid mama wants her to date and the other is a civil-war era mystery that can make or break Shelby’s bid for tenure. The whole thing is engaging and entertaining. And guess what? I’m fixin’ to go out and buy myself book two in the series, called Emma, Mr. Knightly, and Chili-Slaw Dogs. Who can resist a title like that? And here’s even better news: book three is scheduled to come out in November and it’s titled Persuasion, Captain Wentworth and Cracklin’ Corn Bread.

Bubby: I’m not sure exactly what a chili-slaw dog is, but since I plan on stealing the next book from Sissy as soon as possible, I bet I’ll find out! One last thing that I loved about Pride, Prejudice and Cheese Grits is the Pride and Prejudice quote at the beginning of every chapter. They just added a little bit more happiness to my overall enjoyment of the book. 4.25 bubbles from me.

Sissy: Yes, I loved those quotes. They gave a hint as to what was going to happen in each chapter. I enjoyed Pride, Prejudice and Cheese Grits by Mary Jane Hathaway more than a deep-fried bacon cinnamon roll at the county fair. 4 bubbles.

A Quick Look at A New Book: Dangerous Dream by Kami Garcia and Margaret Stohl 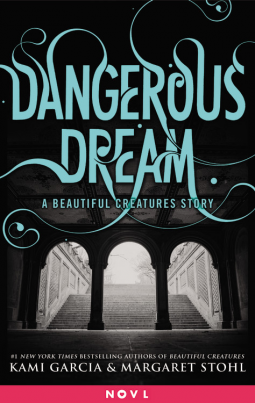 Catch up with Ethan, Lena, and Link as they finally graduate from high school and get ready to leave the small Southern town of Gatlin. But when Dark Caster Ridley makes an appearance, the sometime bad girl can’t resist picking a fight with her sometime boyfriend, Link. Angry and rebellious as ever, Ridley ends up alone in New York City and becomes entangled in the dangerous underground Caster club scene, where the stakes are high and losers pay the ultimate price. (From Netgalley.com)

Bubby: Now all you Beautiful Creatures addicts, don’t get too excited. This is NOT a new book but rather a teaser novella/short story that introduces the new book, Dangerous Creatures (coming out May 20th). All of our favorite characters are back but this time around the focus is on Ridley, that naughty lollipop wielding Caster girl.

Sissy: Yes, Ridley is naughty and if I were her mother I would lock her in her room and duct tape her to the wall! This novella made me mad because la la, yes, it gets you a glimpse into the life of Ridley and whets your appetite for the new book, but the story just leaves you hanging. This is rightfully called a teaser!

Bubby: But it was fun to read anyway! 3.5 lollipops. I mean bubbles.

Bubby and Sissy Are Going To Europe!

Yes, you read that right! Sissy and I are throwing our responsibilities out the proverbial window and are spending the next 6 weeks in Europe. Of course, with the social obligations we have to meet whilst there, (tea parties with the queen and whatnot) we have decided to suspend our blog for the duration. But rest assured, as soon as we return we will have oodles of new books to review!

Actually, we’re not going to Europe (more’s the pity) but we are suspending the blog during this super busy summer season. Don’t worry – we’ll be back!

No Reviews This Week

Bubby and Sissy regret to inform our dear readers that we will not be posting any reviews this week due to a death in the family. Thanks for visiting us and please come back and see us next week!