The Language of Silence by Peggy Webb 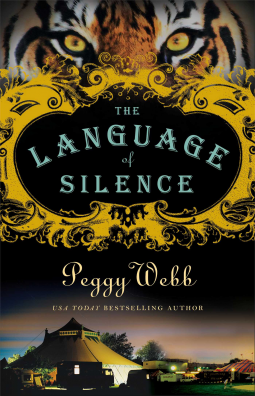 Nobody in the family talks about Ellen’s grandmother Lola, who was swallowed up by the circus and emerged as a woman who tamed tigers. When Ellen’s husband, Wayne, beats her nearly to death, she runs to the only place she knows where a woman can completely disappear—the same Big Top that once sheltered her grandmother. Though the circus moves from one town to the next, Wayne tracks it, and Ellen, relentlessly. At the same time, Ellen learns more about her feisty, fiery relative, and the heritage that is hers for the taking—if she dares. With her violent husband hot on her trail, Ellen must learn to stand up and fight for herself, to break the cycle of abuse, and pass down a story of love and redemption to her children. (Netgalley.com)

Bubby: I have to give props to Sissy on this one. I was not overly interested in reading The Language of Silence. I have difficulty reading or watching anything that deals with domestic violence or the abuse of children. I’m just too much of a softie. And circuses have clowns and clowns scare me because they are creepy. Put the two together and I decided that this was not a book for me. But Sissy made me read it. And I am glad. It was great. I really hate to say it, but Sissy was right. This time.

Sissy: Do we have to keep revisiting the old sad theme of how I’m always right?  The language of Silence was maddening to read, at times, because it is so hard for a person not in an abusive relationship to understand how difficult it is to get out of one. A normal reaction would be to say to the victim, “Just leave the bum. No one is allowed to treat you that way. Call the cops!” It seems so cut and dried. But it’s so not. The thing that made this book readable and not just another sorry sad tale was the magic in it.

Sissy: Yes, I was going to say Aunt Ruth and her “sight” and the back story of Lola and the circus that is interwoven throughout the book take this book to a magical level. Plus spangled costumes and feather plumes.

Bubby: I passionately hated Ellen’s mother, Josie. You’d think that someone who had grown up knowing her father was abusive to her mother would not only recognize the signs in her own daughter but actively seek to educate and protect her child. Not Josie. Her reaction when Ellen tells her about the abuse? “For Pete’s sake, Ellen. Don’t do anything to set him off. You know how moody men can be. You just have to smile and carry on.” Bull hooey. My daughter tells me her husband has hit her? She’s moved out and he’s got a restraining order and we have new ammo for the shotgun. And if my son ever hit his wife or kids? He’d better start running and not stop.

Sissy:  She made me so furious!  Such a dark ages point of view–“Do whatever you need to keep the man happy, and if he’s not happy it’s your fault.”  I think I would add to Bubby’s answer to abusive men–how about our connections to the Samoan mafia?  Didn’t know about that, did ya?!  But karma leads Ellen and Aunt Ruth full circle–back to the place where Lola found happiness and where Ellen eventually finds her own.  How about a dark and handsome trainer of Andalusian horses named Luca?  I think Bubby would get all giddy here and say “Yumm!”

Bubby:  Absolutely! I love the redemption of the circus. It’s where Lola found her true love and life and where Ellen does as well. It’s also where Lola’s husband got what he deserved (no spoilers!) and it’s the same for Ellen’s husband (to an extent) also.

Sissy: I think the answer for all abusive men (and women) is 10 minutes with an angry tiger…

Bubby: Sissy! No spoilers! I can’t wait to read more from Peggy Webb. The Language of Silence gets 4 sequined bubbles from me.

Sissy: A lovely tale. I hate the name Wayne. By the end so will you. 4 bubbles from me.

Click HERE to buy The Language of Silence by Peggy Webb from Amazon.com.

We received a copy of The Language of Silence from NetGalley in return for a fair and honest review.

Posted by bubblebathbooks in By Author, By Title, Reviews