One Evening in Paris by Nicolas Barreau

Alain Bonnard, the owner of a small art cinema in Paris, is a dyed-in-the-wool nostalgic. In his Cinéma Paradis there are no buckets of popcorn, no XXL coca-colas, no Hollywood blockbusters. Not a good business plan if you want to survive, but Alain holds firm to his principles of quality. He wants to show films that create dreams, and he likes most of the people who come to his cinema. Particularly the enchanting, shy woman in the red coat who turns up every Wednesday in row 17. What could her story be?  One evening, Alain plucks up courage and invites the unknown beauty to dinner. The most tender of love stories is just getting under way when something incredible happens: The Cinéma Paradis is going to be the location of Allan Woods’ new film Tender Memories of Paris. Solène Avril, the famous American director’s favourite actress, has known the cinema since childhood and has got it into her head that she wants the film to be shot there. Alain is totally overwhelmed when he meets her in person. Suddenly, the little cinema and its owner are the focus of public attention, and the red-plush seats are sold out every evening.
But the mystery woman Alain has just fallen in love with seems suddenly to have vanished. Is this just coincidence? In One Evening in Paris by Nicolas Barreau, Alain sets off in search of her and becomes part of a story more delightful than anything the cinema has to offer. 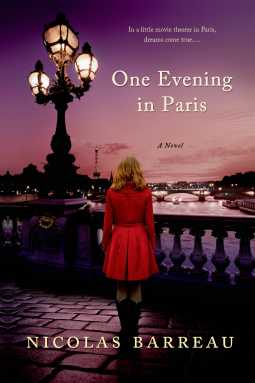 ubby: One Evening in Paris is like a Woody Allen film in novel form. Sweet, quirky, utterly delightful. I loved all the plot twists and turns – and the fact that the whole story wasn’t revealed until the very end. Reading One Evening in Paris reminded me of my college days when I used to belong to the International Film Society. My friends and I would go watch grainy foreign films in a little theater and think that we were oh so sophisticated and mature. Oh, those were the days!

Sissy: I guess my friends Opie and John-Boy and I were too uncouth to belong to the International Film Society. And besides which, Woody Allen films are so annoying. While one of the characters in this book is meant to portray a Woody Allen-type person, it was so much more charming than any Allen film.

Bubby: O.K. I must confess that the only Woody Allen film I actually like is “Purple Rose of Cairo”. So any film snob-esque reference I might try to make really won’t work. I must also admit that me and my haute-monde friends would often go see a foreign film and then go downtown to the dollar movie and watch the latest blockbuster complete with large buttered popcorn and huge sodas. There. The truth has come out.

Sissy: I have never been to Paris (yet) but this novel made me feel like I was there. The whole sweet unfolding love story is encased in a backdrop of cafes, city lights, tiny espressos and baguettes. The main character Alain is so guileless and innocent, I fell in love with him. The search for the elusive “woman in the red coat” is at the same time both urgent and delightful. Alain’s worldly-wise friend, the womanizing professor, is a perfect foil and confidant. The characters of Solene and Allan Wood are almost caricatures of a famous starlet and director but they give life and color and excitement to the story.

Bubby: All in all, One Evening in Paris is absolutely enchanting. I want to take Sissy and hop on a jet right now. We’d grab ourselves some pastries and find a little art-house theatre and immerse ourselves in culture. And then we’d go be obnoxious American tourists. Come on, Sissy! Let’s go! I give this book 4 bubbles.

Sissy: Delightful is the word that completely describes One Evening in Paris by Nicolas Barreau. 3.75 bubbles. Enchante!

Click HERE to buy One Evening in Paris by Nicolas Barreau at Amazon.com

We received a copy of this title from Netgalley in return for a fair and honest review.