The Kiss of Deception by Mary E. Pearson 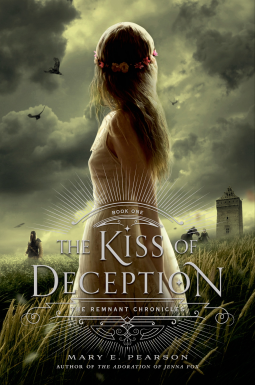 In a society steeped in tradition, Princess Lia’s life follows a preordained course. As First Daughter, she is expected to have the revered gift of sight—but she doesn’t—and she knows her parents are perpetrating a sham when they arrange her marriage to secure an alliance with a neighboring kingdom—to a prince she has never met.

On the morning of her wedding, Lia flees to a distant village. She settles into a new life, hopeful when two mysterious and handsome strangers arrive—and unaware that one is the jilted prince and the other an assassin sent to kill her. In The Kiss of Deception by Mary E. Pearson, deception abounds, and Lia finds herself on the brink of unlocking perilous secrets—even as she finds herself falling in love.

Bubby: The plot was good, the characters were great but the best part of The Kiss of Deception was definitely the way Mary E. Pearson structured the novel. We’d have a segment from Lia’s point of view, a section from the prince’s side of things and then one from Mr. Assassin Boy. And the kicker was that for most of the book you have absolutely no idea which boy is which. We only know them as Kaden and Rafe. Is Kaden the prince? Or is it Rafe? Only one way to find out!

Sissy: I totally didn’t know who was the prince and who was the assassin until it was revealed when the assassin kidnaps Lia. I got it all wrong and was surprised but glad. This tale leads you on a merry chase, literally and figuratively. First of all, when Lia flees on her wedding day with her maid Pauline, she knows where she’s going but not how to get there or what she’s going to do when she arrives. She has to take on a whole new persona and hide from unknown villains. She doesn’t know who to trust, even though her heart is trying to give her clues.

Bubby: Her heart is doing her no favors. It tells her to trust BOTH of the boys – even the one who’s been sent to kill her.

Sissy: But her heart definitely makes her lean in a certain direction. Her new life as a hard-working bar maid prepares her for the rough road ahead when she gets kidnapped and her life takes on a decidedly un-princess-like turn.

Bubby: You’d think there would be a clear-cut bad guy in this story but there really isn’t, except for the shadowy leader of the barbarians who we really don’t get to know much about. And there is one other big nasty scumbucket but I can’t reveal who. You’ll know him when you see him. You’d think the assassin would be the bad guy, but even as you hate what the assassin is doing, you still feel for him and wonder what he could have been under different circumstances.

Sissy: There are lots of delightful side plots and characters that fill out the story and make it so delectable. When I got 95% into the book and realized that things weren’t going to resolve, I threw myself onto the floor, banged my fists and said “Fie!” And when is book 2 coming out? Quick, Bubby, google it and tell me!

Bubby: She’s working on it, but no publication date yet. Boo.

Sissy: The way Mary E Pearson did end this first book was so yummy. So poetic, so fateful. So clever. You must read it!

Bubby: I must admire Mary E Pearson for her versatility as an author. She has written several other YA books but they are all very modern or even futuristic. The Jenna Fox series is really well done and my teens just ate it up but I have to admit it wasn’t my favorite. Just not quite my thing. But this book. Is. Magic. Everything I am looking for in a YA Fantasy novel.

Sissy: The Kiss of Deception is a delicious romantic adventure saga with a touch of magic. All you have to do is look at the fantastic cover art and you will have a preview of the wondrous story ahead. 4.5 bubbles.