Manor of Secrets by Katherine Longshore 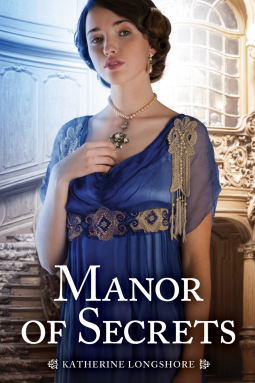 The year is 1911. And at The Manor, nothing is as it seems . . .
Lady Charlotte Edmonds: Beautiful, wealthy, and sheltered, Charlotte feels suffocated by the strictures of upper-crust society. She longs to see the world beyond The Manor, to seek out high adventure. And most of all, romance. Janie Seward: Fiery, hardworking, and clever, Janie knows she can be more than just a kitchen maid. But she isn’t sure she possesses the courage — or the means — to break free and follow her passions. Both Charlotte and Janie are ready for change. As their paths overlap in the gilded hallways and dark corridors of The Manor, rules are broken and secrets are revealed. Secrets that will alter the course of their lives. . . forever.

Bubby: Manor of Secrets came at just the right time for me, having finally finished the current season of Downton Abbey last night. It could very well be an account of events at any of the homes of the Crawley associates. Just quite delicious and perfectly British.

Sissy: First thing I am going to do is put on the gown pictured on the front cover, complete with jewels. Then I shall sit down with a spot of tea (less tea, more cream and sugar) and tell you about this delectable froth of an Edwardian mystery romance (Ha! You were thinking it was one of those stuffy Regency romances but you were wrong! Ha!)

Bubby: Methinks there might be something in that “tea” of yours besides cream and sugar, dearest sister. I, for one, am grateful to live in the modern era and not back in the day. Don’t get me wrong – there is something very enticing about the gowns and the jewels and the servants and the estate and all that but with my luck, I would have been a scullery maid instead of the lady of the manor! Besides which, I have never been very good at doing what I was told to do. Or behaving like a lady.

Sissy: No truer words…Also, those empire waists do nothing for those of us who are both height challenged and how shall I say, more “blessed” in certain areas than others?

Bubby: Exactly. Not that I suffer from the height issue, but let’s just say that I am more Dowager Countess in shape than Lady Mary. Unfortunately. In Manor of Secrets, we have two girls who also are not so good at following the rules that society has laid down for them. All Charlotte wants is to be free and all Janie wishes for is to have a place to call home. Neither of them are happy with their lot in life. And both of them want to get to know Lawrence, the handsome footman, just a little bit better.

Sissy: Lawrence needs to be slapped and thrown into the dung heap. Lord Andrew, on the other hand, is a fabulous surprise and he can escort us to the ball any day! In addition to the handsome men in the story, there are scandalous secrets, twists and turns and an ending you don’t see coming. Also, women’s suffrage! Hooray for suffrage!

Bubby: Yes – there is a massive plot twist that I certainly wasn’t expecting but in hindsight makes so much sense. Oh, and a happy ending. Really. What more could we possibly ask for? Beautiful dresses AND intrigue AND romance AND suffrage! Perfect.

Sissy: And so as my bustuousness and I sail into the parlor like the Dowager Countess, I say “Good heavens! Manor of Secrets deserves 4 bubbles.”

Bubby: And as I shake my head and apologize for Sissy and her “bustuousness”, I too give Manor of Secrets 4 bubbles.

Click HERE to buy Manor of Secrets by Katherine Longshore at Amazon.com