The Here And Now by Ann Brasheres 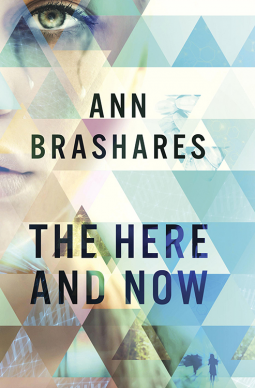 An unforgettable epic romantic thriller about a girl from the future who might be able to save the world . . . if she lets go of the one thing she’s found to hold on to. Follow the rules. Remember what happened. Never fall in love. This is the story of seventeen-year-old Prenna James, who immigrated to New York when she was twelve. Except Prenna didn’t come from a different country. She came from a different time—a future where a mosquito-borne illness has mutated into a pandemic, killing millions and leaving the world in ruins. Prenna and the others who escaped to the present day must follow a strict set of rules: never reveal where they’re from, never interfere with history, and never, ever be intimate with anyone outside their community. Prenna does as she’s told, believing she can help prevent the plague that will one day ravage the earth. But everything changes when Prenna falls for Ethan Jarves.

Sissy: I haven’t read anything from Ann Brashares since the days of Sisterhood of the Traveling Pants. The Here And Now couldn’t be more different from that series, but I really got caught up in this story. This is such a refreshing new twist on the dystopian futuristic society type of story. Imagine solving the problems of the future by going back to the past.

Bubby: It’s like Back to the Future in reverse! Except that the new future you make might not always be the one you were hoping for. I’d like to expound on that but Sissy is smacking me and yelling “Spoilers! Spoilers!” so I guess I won’t.

Sissy: If we could go back in the past I would start smacking you in order to make your present day lies the truth. One thing this book made me do is really think about the future consequences of the way we treat our planet–what could occur because of global warming and the overuse of petroleum.  This showed depth and intelligence in the thinking of author Ann Brashares.  Blood plagues and mutations and the proliferation of mosquitoes in the overly warm future world are convincingly crafted, and I found myself buying into it and counting the years to see if I would be alive when things got “really bad.”(No, I would be thankfully dead, which was a relief to the part of my brain having paranoia about the future).  And even though it is fiction, my psyche found the whole thing to be frightfully plausible, except for the escaping to the past part.  Which is bad, because that means being stuck in a hideous, tragedy-filled future with no way out.

Bubby:  I agree that it was scarily plausible and doesn’t sound like any future that I want to be a part of.  I like my current lifestyle of overabundance and ease.  I loved the characters of Prenna and Ethan. With one exception.  Ethan is a horn dog.  Now I realize most teenage boys fall into this category, but there I felt like Ethan pressures Prenna too much and it doesn’t jive with the otherwise thoughtful and loving boy that he is.  I have a really big issue with teenage sex in books–its just not okay.  They are too young and too dumb to realize the meaning and consequences of intimacy.  Fortunately, they didn’t actually go that far in this book, but I wanted to smack Ethan upside the head and say “give it a rest already!”

Sissy:  That being said, the love story between the two is sweet.  Prenna’s mother is portrayed really well.  She is a flawed character trying to do her best in a difficult situation.  She annoyed me, but I don’t know that I would or could have done things differently in her shoes.

Sissy:  Captivating and thought provoking.  3.75 for me as well.

Click HERE to pre-order The Here And Now by Ann Brasheres at amazon.com