Faelorehn – Book One of the Otherword Trilogy by Jenna Elizabeth Johnson 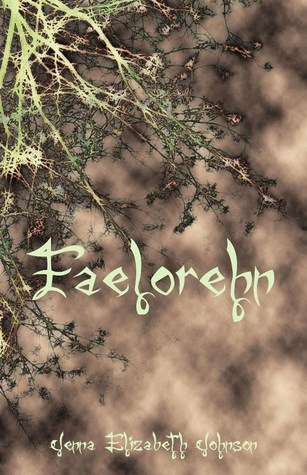 Meghan Elam has been strange her entire life: her eyes have this odd habit of changing color and she sees and hears things no one else does. When the visions and voices in her head start to get worse, she is convinced that her parents will want to drag her off to another psychiatrist. That is, until the mysterious Cade MacRoich shows up out of nowhere with an explanation of his own.

Cade brings her news of another realm where goblins and gnomes are the norm, a place where whispering spirits exist in the very earth, and a world where Meghan just might find the answers she has always sought.

Bubby: At first I didn’t see anything strange about our girl Meghan. Funny eyes that change color? Mine do that. Voices in ones’ head? Isn’t that normal? Doesn’t everyone have voices in their head telling them to do things? My psychiatrist says it’s perfectly fine. I just shouldn’t do what they say! But seriously. I was intrigued with Meghan from the beginning. She was abandoned at the age of 2 on Halloween and has been dealing with all sorts of what she thinks are psychological issues ever since. She has a loving family and good friends but there has always been these issues she has to deal with. And as a teenager, the worst possible thing you can be is different.

Sissy: Well, Bubby, you’ve outed yourself. People didn’t realize that I came and blogged with you in your padded cell, and that I have to wear body armor, just in case. The author describes Meghan as “strange-looking” and obviously the kids at school agree with this description but I couldn’t get a picture in my mind of what it was that was strange. Was it simply the changing eyes? Was it being tall and gangly? Were her eyes too big for her head, like a Roswell alien? What? And then Cade is described as having similarities to Meghan but he is called handsome. Maybe it’s all in how Meghan sees herself. What I do like is that once Meghan finds out who she really is and what she can do, she isn’t suddenly then transformed into a beauty or described as such.

Bubby: On the surface, this seems like the same formulaic plot we’ve seen a bazillion times: girl is weird and is drawn to otherworldly handsome boy who is dangerous to her for some reason, but the attraction is too great and they must be together no matter what. But this is not the case. Meghan is not at all what she thinks she is. She is actually more dangerous than Cade, even though he has a very interesting quality that I cannot reveal at this time. Meghan is not that kind of girl who is willing to throw away her life and safety for the unsuitable boy. If anything, the roles are reversed here.

Sissy: After 17 years of psychological trauma (even though her adopted parents are great), it is understandable that Meghan is a bit of a ninny and has a hard time seeing herself as anything wonderful or more than the freaky awkward person she’s always felt herself to be. But the author does a fantastic job of showcasing Meghan’s potential, promising that in books to come, Meghan will be able to come into her own and recognize how special she truly is. Also, the plethora of otherworldly characters and the whole emotional complexity of the Fae world is very well presented.

Bubby: Yes, Jenna Elizabeth Johnson does a great job of foreshadowing. All the way through you can see hints of what’s to come – just enough to tantalize you into reading the next books ( Dolmarehn and Luathara, both available now). I was totally sucked into the story by how quickly I felt invested in the characters. It’s a quick paced read that moves from conflict to conflict peppered with bits of humor and romance.

Sissy: Meghan also has the requisite geeky friends, but one in particular turns out to be a great ally. I immediately read book two, Dolmarehn and I had pangs of longing when I had to put aside Luathara until I had finished the stack of books I was required to read first. Faelorehn is a wonderfully intriguing first book in a very well written trilogy. 4 bubbles.

Bubby: I haven’t gotten to read either book two or three yet, but they are definitely on my list. 3.5 bubbles from me.

We were given a copy of Faelorehn by the publisher in return for a fair and honest review.