Threads That Bind by Brant Williams 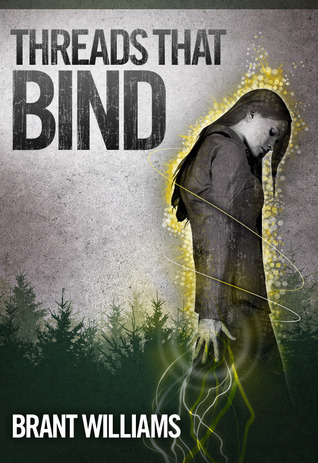 At 16, Madison has accepted herself for who she is: smart and witty, but overweight with thick glasses and the social life of a Tibetan monk. Everything changes the summer before her junior year of high school when her eyesight inexplicably corrects itself, and she begins to rapidly lose weight. However, her new look comes with an unexpectedly expensive price. Madison’s first kiss with the boy she has had a crush on for years triggers powers she can’t control, almost killing him. She discovers she is a Berserker, a powerful being chosen to guard the world from the Havocs, ancient creatures brought into our world by magic thousands of years ago. They cause destruction and death, but cannot be killed. Instead of enjoying her new look and popularity at school, Madison must now work with the Berserkers to master her powers and bind the Havoc before it kills her. (From Goodreads.com)

Bubby: Yes, I know. We said we were sick of Young Adult Paranormal and didn’t want to read or review or even look at it anymore for a while. And we meant it! Except for this book. Because this one is different. No elves. No fairies (or faeries or fae or whatevers). Only a smidgen of magic. No whiny girls who can’t control their feelings for highly inappropriate vampires and/or werewolves. Nope. This is something new and different. Hurrah! I mean, really. Have you ever heard of a Berserker before? (Not the hairy mad Viking warrior type). Me either! As it turns out, Berserkers are always male. Always have been, always will be. There is some sense to this, I think. Men are much more likely to go crazy and start smashing things than your average woman. But Madison is, in fact, a Berserker. How? Why? Read the book. It all makes beautiful sense.

Sissy: We don’t actually know why she’s a Berserker –

Sissy: Well aren’t you the Duchess of Discovery! One day I shall be like you, able to speed-read all the books in the universe.

Bubby: I gave it to you. Not my fault you didn’t get around to reading it yet.

Sissy: You are rude and insensitive to my geriatric state. I am going to turn into a Berserker one day and have superhuman powers and then you’ll be jealous. I also am glad we made this exception to our “no nauseating paranormal YA (for a while)” rule. It was so engaging. I zipped through it and can’t wait to read book two, Unbound.

Bubby: You’ll like it. It was even better than the first book. I know this because I already read it.

Sissy: Your insecurity is becoming unbearable!

Bubby: You’ll get over it, I promise. Now talk about the book, will you?

Sissy: In the back of my mind I was somewhat bugged by the fact that Madison, in coming into her powers, also gets skinny and loses the Coke-bottle eyeglasses. Because in my enlightened state, I want everyone to be loved and appreciated as they are. But on the other hand, isn’t it everybody’s secret dream to wake up rid of whatever it is about ourselves we dislike most? So it’s a wash.

Bubby: To be fair to the author, it would be rather hard to be a monster-killing machine if one was plump and near-sighted.

Sissy: This is true, so we shall move on. I also felt guilty about the bit of revenge Madison gets for her bad treatment at the hands of one of the highschool mean girls. I felt guilty because I enjoyed it. And there is no syrupy, grotesque romance in this first book, although the promise is there. I’ll have to wait for Unbound to see how it goes.

Bubby: Let’s just say that a delicious little love triangle develops – and drama ensues. And it’s all completely unpredictable. I never saw it coming. You’ll be shocked. There are twists and turns aplenty in both books. Family secrets are revealed, dark histories are unraveled, and so much more. This is really one of the best YA debuts I have ever read.

Sissy: This is also written by a male author. We don’t usually review male authors, but Brant Williams did exceptionally well writing a teenage girl character. I almost couldn’t believe it. I agree with Bubby. Threads That Bind is really good. 4.25 bubbles.

Bubby: Wow, we have been agreeing rather often on ratings lately, Sissy. The moons of Saturn must be aligned or something! I give Threads That Bind 4.25 bubbles also.

Click HERE to buy Threads That Bind from Amazon.com