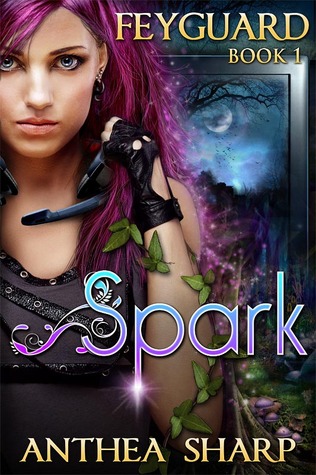 What if a high-tech computer game was a gateway to the treacherous Realm of Faerie?
Superstar gamer Spark Jaxley’s life might look easy, but she’s part of an elite few who guard a shocking secret; the Realm of Faerie exists, and its dark magic is desperate for a foothold in the mortal world.
Aran Cole hacks code and sells his gaming cheats on the black market. It’s barely a living, and one he’s not proud of. But when he turns his skills to unlocking the secrets behind Feyland–the most exciting and immersive game on the market–he discovers power and magic beyond his wildest dreams.
Spark’s mission is clear; pull Aran from the clutches of the fey folk and restore the balance between the worlds. But can she risk her life for someone who refuses to be rescued? (From Amazon.com)

Bubby: I was so excited for this new novel by Anthea Sharp. It is the first book in the Feyguard Series, a spin-off from the Feyland Trilogy (The Dark Realm, The Bright Court and The Twilight Kingdom). It helps a little with understanding the dynamic between characters to have read the Feyland Trilogy but Spark can definitely stand on its own. Our main character, Spark Jaxley is a superstar gamer who would really like to have a bit more of a normal life. Unfortunately, she won’t find that any time soon. Spark starts off quickly and escalates into lots of action and adventure right away.

Sissy:  To be honest with you I was not excited to read this novel.  Bubby made me, because we received this book in exchange for our honest review.  My not wanting to read Spark has nothing to do with the author–Anthea Sharp is a really great writer.  I just generally don’t enjoy this genre.  I don’t like gaming, I don’t like futuristic settings, and I don’t like weird made-up names.  Unless I make them up.  I DO, however, like magic, fantasy and romance, so I read the book.

Bubby: I, on the other hand, am a total geek/nerd/trekkie whatever you want to call it. I love this genre and sci-fi and fantasy make me very happy. I am not a hardcore gamer but I do love computer games and can get lost for hours playing. I have to admit that I spent a great deal of Christmas vacation playing the video games that my children received as gifts! Therefore, this whole thing is right up my alley. It’s not just a book about gaming, though. It’s a great read even if you’ve never played a video game in your life. Want proof? Sissy liked it!

Sissy:  Okay, let’s not get all mushy about it–I still wouldn’t pick this genre off the shelf.  Here’s what I liked about Spark: Spark, the character, is an awesome girl!  She is slightly tomboyish but can rock the spandex when needed.  She is true to herself and is real.  I liked the new character Aran, and how he struggles to do the right thing and go for the girl.  I liked how much I hated the bad guys (evil twin gamers Roc and Cora Terabin).  My favorite, though, was Niteesh–super little team-playing minuteman! And I think Anthea Sharp does a fantastic job with the Faerie realm.  She describes things so vividly and fleshes out the inhabitants so fully, you feel like you are actually there.

Bubby: I agree. The characters are so well drawn and the settings are amazing. Now, I am in no hurry to meet any of the dark and nasty elves, but I wouldn’t mind hanging out in fairyland for a while. I would be just fine living in a tree, having pointy ears, wearing floaty iridescent robes and having a magical ability or two wouldn’t hurt my feelings. Sometimes my dull and plodding soul just yearns for a little magic and enchantment. That’s one of the reasons I like playing video games. Just like reading, it transports you elsewhere for a time. Fun.

Sissy:  Except for the magical ability, you’ve described the way you are right now, Bubby.  I still think you should get those ears fixed.  And your soul is hardly dull and plodding.  Dill and pudding, maybe.  As for video games–they give me anxiety.  But I endured them for the sake of reviewing this book, which is very well done.

Bubby: Hey! My ears are just fine, thank you. I still think that deep down you want to be a gamer! If nothing else, it would improve your aging reflexes! At any rate, I will continue to read Anthea Sharp’s books for as long as she writes them. All the magic and adventure I could ask for mixed with a dash of romance. Lovely. 4 bubbles from Bubby, the wannabe elf queen.

Sissy:  You are surely wrong.  Not ever going to be a gamer.  3.75 bubbles from Sissy the enchantress (current, not wannabe).