Friday Favorites: Eventide (Tales of the Dragon’s Bard #1) by Tracy and Laura Hickman 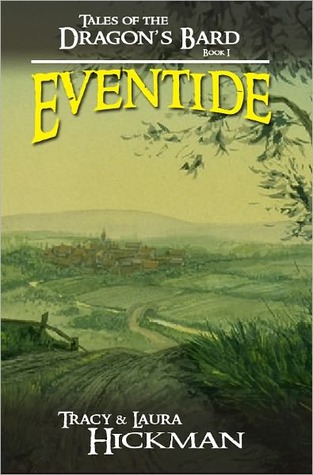 Jarod Klum was trapped in his small life in the small village of Eventide and saw no means of escape. He would never be worthy of the woman of his dreams, never achieve great deeds of valor and never be remembered in song or story. It wasn’t that he was without dreams. He dreamed them every night; of rescuing the imperiled Caprice Morgan from marauding pirates who had somehow come up the river or of returning from a great Quest beyond the village boundaries laden with treasure that he could lay at the feet of the appreciative Caprice Morgan. But each morning he awoke in his straw bed and knew he was just Jarod Klum.
Until, that is, the coming of the Dragon’s Bard. The Dragon’s Bard convinced Jarod to win his fair Caprice through ‘heroic deeds of a more manageable scale’ – setting Jarod on a course of misadventures that turns the town on its head. Jarod’s single-minded pursuit of his greatest wish – even if it is a broken one – escalates until the only thing left for him to do is to become a dragonslayer and save the town from a ferocious, legendary monster that everyone fears but no one has ever seen. ‘Eventide’ is brought to life through the stories of the interweaving lives of its citizens, their follies, joys, tragedies and triumphs on a scale of life to which we can all relate. In the end, it is a visit to a place where we ourselves would like to settle down and live out our lives as we should. (From Goodreads.com)

Bubby: Hey, Sissy, it’s been a while since we’ve done a Friday Favorites!

Sissy: And this one is one of the most fun books I have ever read. It is so clever and goofily whimsical. I applaud the Hickmans for having such creative brain cells! The characters are so weird, entertaining and craftily crafted. I had a ball reading Eventide.

Sissy: Do we have to deal with your absurd wordsmith envy again?

Bubby: Wordsmith envy? Really? It’s like you think you are a character in Eventide. Hmm, let’s call you Sissy the Witless Word Coining Sprite. You can even have little purple iridescent wings with all of your strange words and expressions flitting across them. I like it! I like it! And I can be, let’s see…

Sissy: You can be Bubby the Fatuous Foot Fungus Fairy!

Bubby: Hey! Who you calling fatuous? I prefer Sorceress of Sarcasm, thank you very much. Now back to the book. Any novel that has characters like Gossip Fairies and Centaur Farmers and dancing blacksmiths is a win for me. I have long been a fan of Tracy Hickman’s high fantasy work – his Dragonlance books are well known to us nerdy geeky people – but his writing with his wife, Laura is fantastic in a whole new way. Eventide is light and fluffy and just dang fun.

Sissy: The premise of the story is that the Dragon’s bard has to collect stories to tell the dragon king so as not to be killed. So the Bard is always meddling in the villager’s affairs, especially Jarod our main character, with hilarious results. But there’s also a bit of romance and danger and even heart warming moments. I can’t say enough about how satisfyingly enjoyable Eventide was.

Bubby: A great start to a (so far) 3 book series. I can’t wait to read the other books (Blackshore and Moredale) and find out what the Bard is up to next! 3.75 floaty and frothy bubbles from me.

Sissy: Such a fun read for teens and adults alike. I don’t want anyone to think that this is too lightweight or is just for kids. It really struck my funny bone and for that reason, I give it 4 bubbles.

Click HERE to buy Eventide (Tales of The Dragon’s Bard #1) at Amazon.com